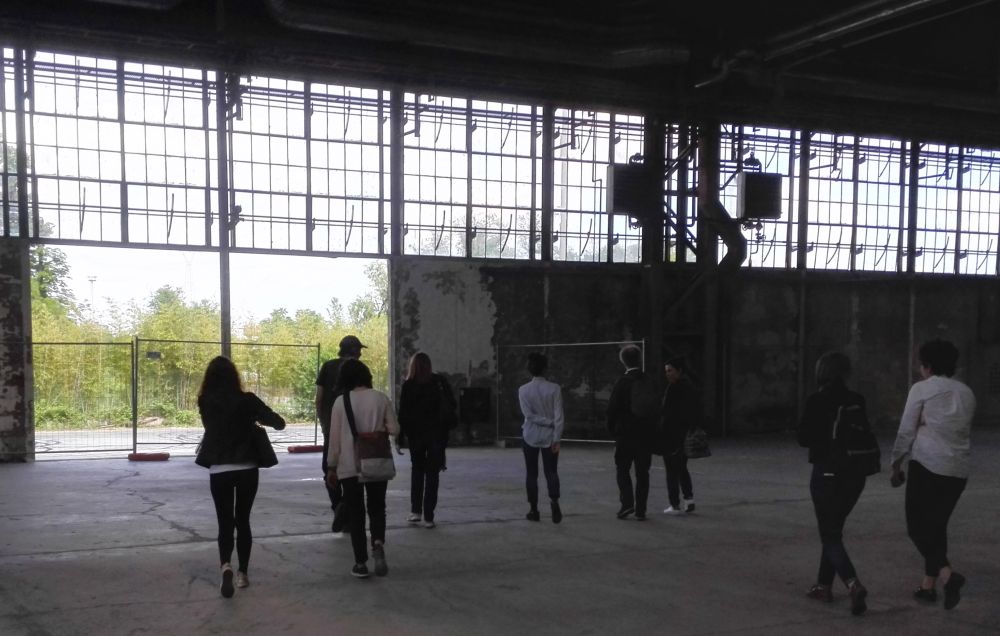 The growth and development of urban societies has reached an incessant pace. The adaptation to new needs, the ambition to improve quality of life, and the digitalisation of metropolitan spaces have marked the transition to the a post-industrial city: a city that produces services, not commodities. In post-industrial cities public space, expression of economic, demographic and technologic development plays a crucial role in shaping community life. Post-industrial areas go through a transition from a ‘non-place’, a term coined by philosophist Marc Augé referring to locations that are not significant enough to qualify as places, into a space where human interactions are possible. In this context, those urban places used in the past for industrial production do not meet the needs of a changing society. Urban communities ask for lively public spaces, aiming to appropriating territories that have been for long time privatised and made inaccessible to them. This is where proGIreg comes in!

Turin, the city with the highest green area density in Italy, hosts proGIreg’s Mirafiori South Living Lab. The district hosted Fiat plants for a long time, and is now seeking diversification to become more vibrant, attracting people from around the city thanks to various inclusive environmental initiatives. The innovative initiatives developed in the area by local actors and entities (among them the fondazione Mirafiori), that involved citizens in this process of adaptation to the new urban reality, have garnered great media attention. Turin aims to demonstrate that by integrating the voices of the different local actors, the project can give priority to real economic and social needs.

This inclusive approach makes Mirafiori a standout Living Lab. Its social gardens, collaborative urban gardens in schools and biodiversity education, bring added value that is difficult to find in other cities where vegetation is mainly used as an ornament. Turin is a shining example to other Italian cities, and globally, on the benefits of integrating a strategy for the socio-environmental development into the planning process for the implementation of nature-based solutions. However, it is important to take into consideration other urban realities, and to be aware of the innovative solutions developed in this sector and determine possibilities for improvement. This is the main aim of proGIreg: to facilitate the knowledge exchange among the participants in the project. Lessons are shared among Turin and the three other cities that are front runners in the program: Dortmund (Germany), Ningbo (China), Zagreb (Croatia). Dortmund, which has been regenerating the “Emscher Landschaftspark” area, in the German valley of the Ruhr since 1989 - is an interesting comparison to Mirafiori. Looking at Dortmund, Turin has the opportunity to explore two important aspects of the implementation of NBS: the adaptability of the regeneration programs and strategies in a middle to long term perspective; and the potential of those interventions at the metropolitan and regional scale. It is also worth taking into consideration the case studies of Ningbo and Zagreb. The first demonstrates high innovation in assessing the consequences of its initiatives in the local business setting, strengthening public-private partnerships for the economic benefit of local stakeholders. Finally, the example of the Croatian capital helps to study NBS as a tool to enhance urban resilience – as demonstrated during the response to the recent earthquake in the area.

The international character of Turin, gives Mirafiori the opportunity to be ‘avant-garde’ in the field of urban regeneration through NBS implementation – a field that attracting growing interest in Europe. Looking beyond proGIreg, two cities worth comparison are Barcelona (Spain) and Istanbul (Turkey), are both engaging in innovate NBS. Poblenou, the industrial neighbourhood close to the Barcelona city centre, has through the last decade been revitalised with nature-based solutions. In particular, green roofs with integrated high-technology monitoring systems; have transformed unsustainable industrial plants into highly efficient low carbon buildings that contrast the “heath island” effect. The replicability of this strategy at the neighbourhood scale – and beyond -, makes Poblenou an international case study for the regeneration of industrial heritage with minimum interventions.

Istanbul has a different approach where the Kartal district saw a regeneration plan financed for a huge industrial area, with an international architecture competition opened up to plan the area. None other than the “Zaha Hadid architects” group won the competition. Their appealing masterplan, which combines buildings with wide green public spaces, was however flagged to have the risk of a high potential for gentrification. For this reason, the local government decided to improve the winning proposal with a co-created approach, where neighbourhood communities could take part in the discussions regarding the real needs of the area. This more considerate and thorough approach can result in social sustainability of the intervention in the long-term.

Looking at these examples it is clear that former industrial areas can be converted to functional and thriving parts of cities, through minimal and replicable transformations on a small scale; moreover, the continuous monitoring of the adopted solutions allows controlling the sustainability of the projects in the long term. Turin especially is showing great capacity for urban innovation in the regeneration of its largest industrial area with nature-based solutions, and has a lot to contribute to the replication of these solutions in other cities. Even mistakes made by other local governments can help cities learn and create better planning for nature-based solutions that, now more than ever, must take into account the risks associated with metropolitan population growth, climate change and urban inequality.