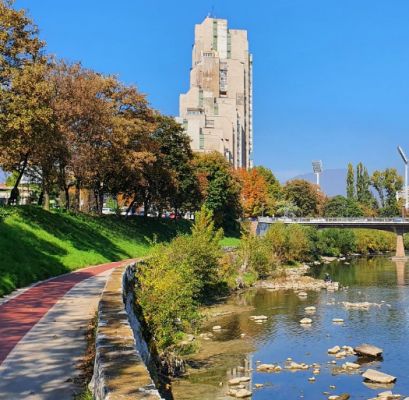 Zenica - out of all proGIreg Follower Cities - is lucky with plenty of existing green space (58% of total urban area), despite being a still an active industrial city. Zenica is located in the valley of the river Bosna, with the flat landscape being well suited for green infrastructure. However, the accessibility and connectivity of the existing green areas is lacking, which the city has planned to address, with six planned urban regeneration areas around the river. 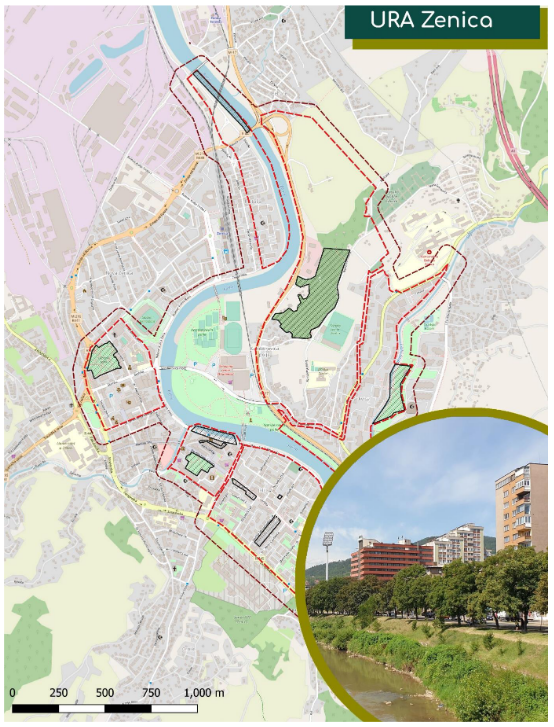 The proGIreg activities began with a workshop for stakeholders, such as NGOs, municipality, companies and utility entities, to scope current spatial plans, existing initiatives and potential challenges for nature-based solutions (NBS). Each proGIreg NBS was analysed, to see which meet the needs of the stakeholders best and suit the planned transformation areas. The initial workshop was followed by more engagement with varied stakeholders to help scope opportunities and needs within each area. Many abandoned buildings were identified as good for potential renovation and subsequent implementation of community-based urban farms and gardens and green walls and roofs. The city also organised an event to advocate and promote the use of NBS and their benefits in urban areas. The municipality is hoping to improve citizen wellbeing by prioritising interventions that improve air quality. 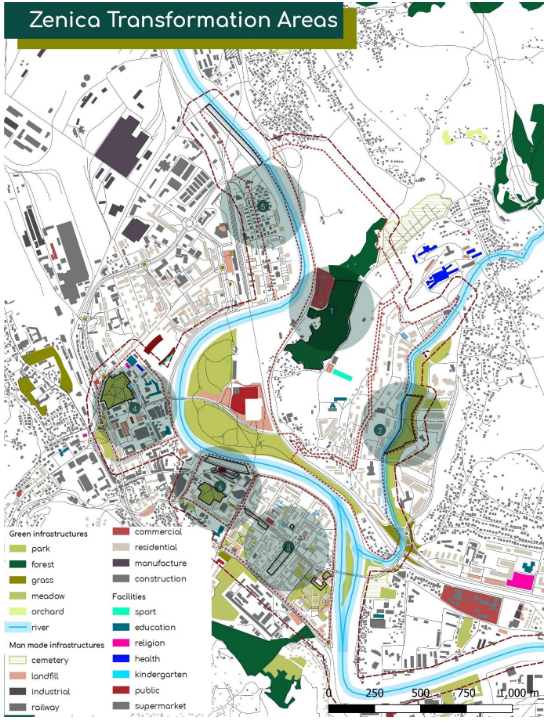 The first planned regeneration area is a brownfield covering 66 hectares (ha), located on the bank of the river Bosna. The area has been planned in for redevelopment as a green area, and thus introduction of NBS fits in. A 7ha park for the local community will be built that can encompass accessible green corridors for cycling and green recreation areas. The area has an old landfill site that is planned to be revitalised with proGIreg NBS introducing leisure activities and clean energy on former landfills; however as the area is at risk of collapsing it needs thorough assessment ahead of any developments. A local university has been engaged to help develop plans for the place.The second transformation area (35ha) is residential and recreational, also connected to the riverbank. The existing greenery can greatly benefit from more trees and the building of green corridors. The third planned area is in the immediate vicinity of the city centre, and is a residential and business zone (33ha). The area could benefit from community-based urban farms and gardens and green roofs and walls. The co-design activities indicated that the kindergartens in this area would be suitable for hosting a pilot intervention, helping children interact with nature in an educational setting.

The fourth area (16ha) is also characterized by being a residential and business area, but with a low population density. There is an existing park with a botanical garden. Learning from proGIreg Front Runner city Zagreb – Zenica would like to transform the botanical garden into a therapeutic garden. People with disabilities and special needs would be involved in the co-design of the site and management of the embedded urban garden. The fifth area is mainly commercial (15ha), and borders an industrial with a large steel production plant on one side and on the other a river. The plans entail creating a green corridor alongside the riverbank, allowing for a cycling path. Last but not least the sixth area is in the city centre (8ha), this area has a high population density and high-rise buildings. Green roofs and walls are planned in garages and parking buildings, and green corridors for pedestrian roads leading to the river.

The co-design and planning for the NBS interventions in Zenica have taken great care to involve marginalized communities in the area, as accessibility in the city is a pressing issue. The city has and plans to continue involving people with disabilities and special needs, and the elderly, and associations and institutions working with them to understand their needs and desires in the planning of the NBS. In specific intervention areas elderly care homes, schools for children with special needs and other organisations working in this field have been identified as future partners in the transformations to ensure proper design and management of the solutions. NBS in the vicinity of care homes and schools are also planned for easy accessibility. Read the ‘Mid-term report on the implementation process of the urban plans in Follower Cities’ to learn more about Zenica’s exciting urban greening plans.