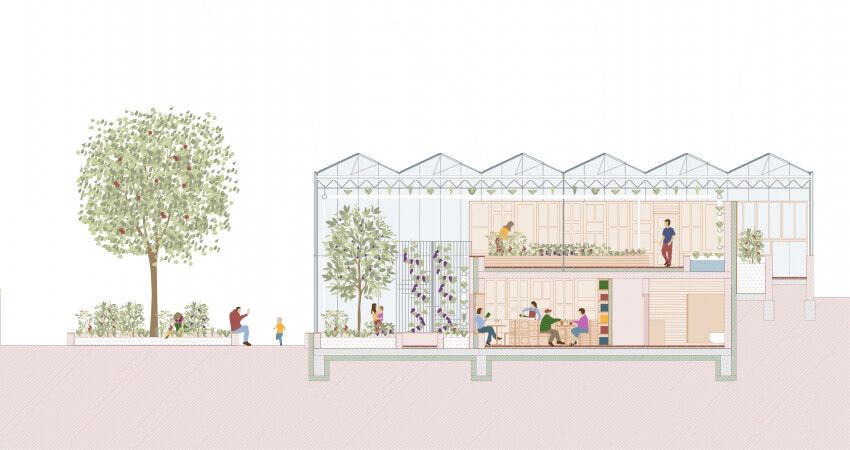 A design proposal, inspired by proGIreg’s future aquaponics community centre in Dortmund, has been nominated for the 29th Euregional Prize for Architecture.  The design, by Luisa Ropelato from RWTH Aachen University, contributes to the circular economy and sustainability of Dortmund’s Living Lab area, both in terms of how the building will be used and how it will be built. A key feature of the design is that the entire building can be built with re-used building materials, which can be found within a 2.2 km radius of the potential building site.

Considering that 40% of Germany’s energy consumption and over half of its waste is produced by the building sector, Luisa decided to do things differently; so she spent two months researching the area to find out how she can be a role model for her industry. She found out that the brick rubble from former brick buildings located next to the site can be used as concrete aggregate for prefabricated elements, which shape the supporting structure of the building. Also, the community recycling centre located nearby, offers a great opportunity to collect wood, windows, doors and plants and use them for example for non-load bearing walls. As part of her research, Luisa also found two greenhouses from soon-to-be closed nurseries, which can be dismantled and rebuilt at the aquaponics centre.

Aquaponics is a type of soilless farming in which waste water produced by the fish provides nutrients that feed the plants, and the community centre is set to be a focal point of the proGIreg Living Lab in Dortmund. Luisa’s design is based on a landscape of plants, shrubs and trees growing on the floor, walls and ceiling and finally extending into the exterior space. The upper floor connects with the ground floor through a two-storied space in the south, which works as a climatic buffer zone. The building is usable throughout the year due to the climatic separation of the rear part of the ground floor. Luisa’s vision is not only about building the centre as sustainably as possible, but also about making it a true community space, open to all. In the post-industrial area of Dortmund-Huckarde, much of the soil is left contaminated and not suitable for farming; this centre will give residents the opportunity to grow their own local vegetables and fish, use the open kitchen on the ground floor and participate in workshops at the centre.

Luisa Ropelato had been involved in the initial proGIreg proposal work and later based her Master thesis design proposal on the concept of the community aquaponics centre. In the year that followed, Luisa founded the architects for future together with two fellow students.

The winner of the 29th Euregional Prize for Architecture will be announced on 16 November 2019.