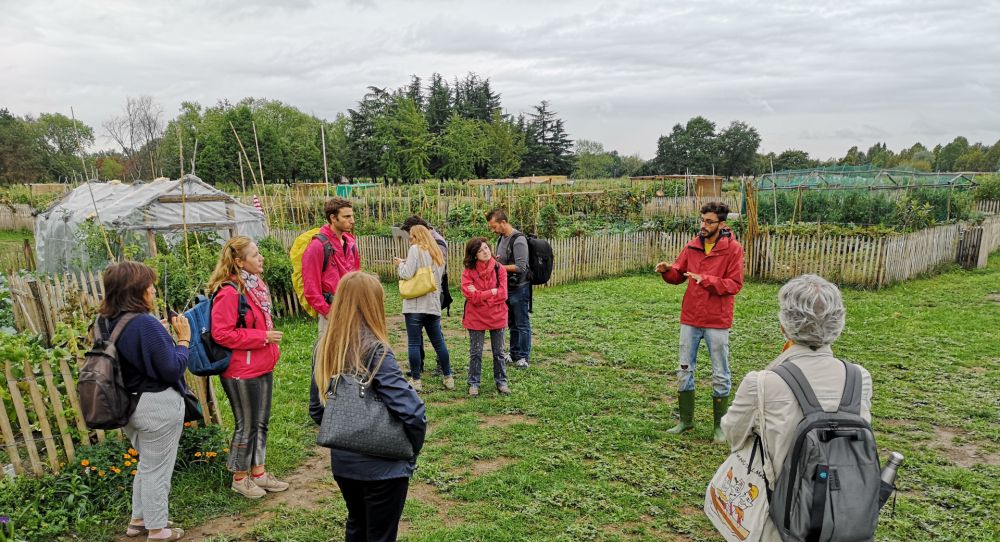 Last week, delegates from Piraeus (Greece) - a commercial port on the East Mediterranean coast, in one of Europe’s most densely populated municipalities - paid a visit to the community gardens of Turin (Italy) to learn how local citizens have teamed up with the university and local associations to improve urban pollinator biodiversity.

The first stop of the day for the group - which included Kristina Maknea and Katerina Oikonomou (City of Piraeus), Professor Simona Bonelli, (University of Turin), Martina Di Labbio, (Politecnico of Milan) and Laura Ribotta, Turin City Council – was a visit to the vegetable gardens of Orti Generali, which is part of the proGIreg Living Lab area of Mirafiori Sud. There, the visitors learned about the Farfalle in ToUr project, a collaboration between the city, the university and the Mental Health Centre, and now also part of proGIreg, which creates networks of pollinator-friendly plants and works with mental health patients who help monitor the increase in butterflies and bees in the area. The aim of the project is to improve biodiversity, while reducing social stigma around mental health, increase confidence of the participants and encourage them to contribute to the development of their own neighbourhoods.

The group also visited the housing community L’Aquilone, where the social cooperative ‘Il Margine’ trains people with mental disabilities to become experts in breeding caterpillars and in identifying the most suitable plants for attracting butterflies. Next year the plan is for these participants to share their knowledge and experience by training other vulnerable groups, in particular single mothers who have been evicted from their homes. Through this initiative, participants who were previously marginalised have now been able to find their place in society and contribute to their community’s future, while even helping others to also learn about pollinators and become part of the project.

Through the proGIreg project, this so-called ‘citizen science’ model of increasing biodiversity through the help of marginalised groups is being replicated throughout Mirafiori Sud. By creating pollinator-friendly gardens next to shelters, health facilities, refugee centres and community spaces, the network of green spots throughout the Living Lab is expanding, and being closely monitored by Turin’s dedicated citizen scientists.

Having seen the progress made in Turin and received guidance from those running the initiative, the guests from Piraeus are considering adapting the model to strengthen their city’s ecosystem and increase resilience in the face of climate change. The visit took place within the framework of the proGIreg project, which creates productive green infrastructure to help improve living conditions and reduce vulnerability to climate change in post-industrial urban districts. A key component of the project is the city-to-city exchange to facilitate replication of the nature-based solutions. With Turin’s dedicated butterfly experts from the university and its already-established pollinator improvement processes in place, the city is the ideal partner for Piraeus to learn from, when it comes to improving the biodiversity and ecosystems of urban areas. Other cities planning to follow in Turin’s pollinating footsteps include Dortmund (Germany) and Cascais (Portugal).

Those in Turin between 13 - 25 September 2019 and looking for inspiration can attend the photo exhibition ‘Le farfalle, il giardino e citizen science’ (The butterfly, the garden and citizen science) at InGenio, Via Montebello 28, Turin.